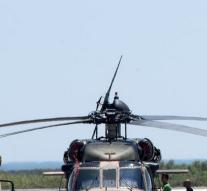 - The eight Turkish soldiers who emigrated after the failed coup in a helicopter to Greece and there applied for political asylum will be returned. The Foreign Minister Mevlüt Cavusoglu on Saturday night via Twitter announced that his Greek counterpart Nikos Kotzias phone has promised to deliver them as soon as possible.

Athens confirmed the call but was reticent about the deportation. Greek lawyers go there given the experience of asylum procedures from that perhaps will take twenty days before a decision is taken. The crew escaped deny having been involved in the coup. They were taken off to transport the wounded. When the police took their gear under fire, they had gone off.