Home / World / Greece gets away refugees at border 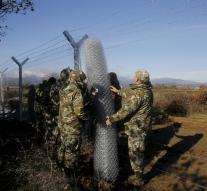 - The Greek police on Wednesday removed some 2,300 stranded migrants at the Greek- Macedonian border and transported to the capital Athens.

The migrants, mostly from Pakistan, Morocco and Iran, were already three weeks trapped in the vicinity of the northern Greek village Idomeni. They wanted the border to Macedonia to travel further to Northern Europe, but the Balkan country had them canceled.

About 350 police officers were involved in the move. The refugees were in about 45 buses drove to Athens where they were housed in a large sports hall. The migrants, according to the police thirty days to leave Greece but not detained.

Hundreds of thousands of people flocked to Europe this year, mostly via Greece, but the Balkans block the passage since last month. Only Syrians, Iraqis and Afghans are still admitted as refugees from war zones.