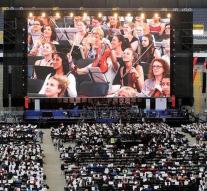 frankfurt - The greatest band ever Saturday gave a performance at the Commerzbank Arena in Frankfurt. Exactly 7548 musicians played as sober as possible together in the temple of football Eintracht to get into the Guinness Book of Records. The symphonic army brought alongside works by Dvorak and Beethoven to sing a song from the musical Starlight Express and the evergreen 'Music was my first love.'

The strings, winds, pipers and drummers came from all over Germany to Frankfurt but there were also musical guest workers, including Dutch, greets. The old record stood since 2013 on behalf of the Australian city of Brisbane where instrumentalists 7224 places in the gigantic orchestra pit.