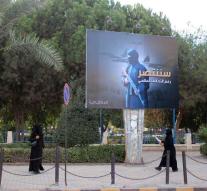 berlin - According to various media, the German authorities have prevented a major terrorist attack by Islamic State. This was preceded by a survey of more than a year. It was intended that in June three jihadist teams would travel to Germany to make the preparations and ensure implementation.

Target was according to the channels NDR and WDR possibly a music festival. The Süddeutsche Zeitung and Die Zeit also report that. The Public Prosecutor confirmed the planning of the terrorist act. 'For us, the state of affairs in this case was very concrete and also a heavy pressure,' said the Prosecutor General against the NDR.

A central role would have been played by a German couple who went to Syria in the autumn of 2015 to join IS. The woman, a convert, tried to recruit German girls from Raqqa who were prepared to marry a potential attacker. That way they had to enter Germany more easily. However, one of the women approached worked for a security service.

The suspected couple has been in a Kurdish cell in the north of Syria since October 2017. Their client was the high IS official Abu Mussab al-Almani, possibly a now-lost Swiss.