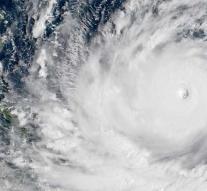 manila - The Philippine authorities evacuate thousands of people from the coastal areas because of the approaching typhoon Mangkhut. The heavy storm probably reaches Luzon on Saturday, the largest island in the Philippines.

'There is now a preventive evacuation in some areas,' said the governor of the northeastern province of Cagayan. There schools are closed and the emergency services, army and coast guard are mobilized. The storm, which is locally called Ompong, currently has a diameter of approximately 900 kilometers. Wind speeds of over 200 kilometers per hour have been measured.

Also in other provinces the arrival of the storm with nervousness is awaited. The governor of Batanes, which consists of a series of islands, said he feared the welfare of thousands of families. 'I'm particularly worried about houses made of light materials. '

The Filipino Red Cross says that a total of around 10 million people live in the danger zone. The authorities warn that the storm can destroy homes and cause flooding.