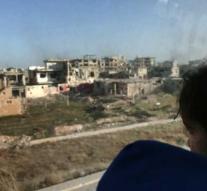 beirut - A convoy with almost 7000 members of a rebel group, their relatives and other civilians, left from a besieged part of East Ghouta near Damascus. They travel to the northwest of Syria. That reports the Syrian Observatory for Human Rights.

The exodus came about after Russian negotiations to transfer the enclave to the Syrian government. The observatory says that Tuesday morning some hundred buses have left the area around the cities of Arbin, Ain Tarma and Zamalka. Most people who leave the area at the moment belong to the militia of the al-Rahman Legion.

Since Thursday, the rebels have gradually left East Ghouta and accept a safe passage for themselves and their families to Idlib in northwestern Syria, where the fighting groups still serve.

The rebels in East Ghouta have been defeated in recent weeks during heavy attacks by the Russian-backed Syrian army.

The Russian news agency Tass reports that nearly 6800 rebels and their families have been evacuated from East Ghouta to a part of the northwestern province of Idlib. That brings the total number of rebels leaving the area in the last three days to over 13,000.

The last remaining area in East Ghouta, which is still controlled by rebels, is the city of Douma. Tens of thousands of civilians shelter for the violence there.

Except in the northwest, the anti-Assad rebels have a piece of territory on the border with Jordan and Israel and small enclaves near the cities of Damascus, Homs and Hama.