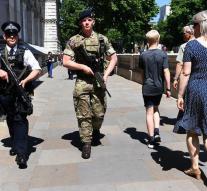 london - Britain has lowered the threat level Saturday after the massive deployment of police and military since last Monday's suicide bombing. That said Prime Minister Theresa May after a crisis conference. 'The country will stay vigilant,' she said.

The threat level was raised this week to the maximum after bomb attack at a pop concert. That was for the first time in eleven years. The government took account of a new terrorist attack.

So far, the investigation has already been thirteen people arrested in connection with the terrorist act. Two of them were set free without imprisonment.