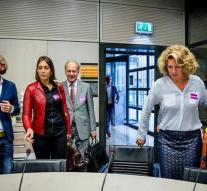 amsterdam - A portion of the grant money that was meant to boost campaigns to Ukraine referendum shall be paid by the applicants.

Some applicants have to repay the full amount, sometimes more than 40 000. They got that money from the Referendum Commission. The grants, totaling nearly 2 million, were intended to incite 'public debate' about the referendum on the association agreement with Ukraine. That the Times reported on its website. The newspaper searched documents after a Wob request.

In distributing the subsidies allowed the committee, which was led by former D66 Secretary Medy van der Laan, however, having to examine the content of applications, the newspaper writes. As long as the request was technically in order, the applicant was eligible for the subsidy. In retrospect the decision appeared to have unpacked wrong. Some applicants did hardly bother to put something serious on legs.

At that time there was already grumbling about the value of various campaigns, including on someone who let's make toilet rolls for tens of thousands of euros showing objections to the treaty with Ukraine. That, however, does almost nothing to repay.