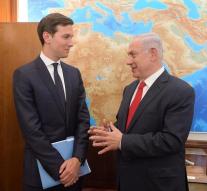 jerusalem - The son-in-law of US President Donald Trump spoke in Israel on Wednesday with Prime Minister Benjamin Netanyahu. In Ramallah, Jared Kushner will visit Palestinian President Mahmoud Abbas in the evening. The visit is intended to discuss the peace process.

The 36-year-old Kushner, a real estate developer with little diplomatic experience, arrived in Israel for a lightning visit on Wednesday morning: he leaves soon after midnight. Video shows show how Trump's grandson is greeted by Netanyahu.

Israeli and American officials gave nothing on the content of the conversation. Palestinian sources said that in the run-up to the consultation between Abbas and Kushner they were asked to draw up a list of twelve requirements that they would certainly have agreed upon in peace negotiations.