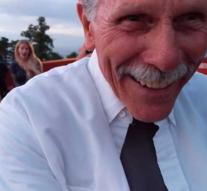 albuquerque - A video of an American grandfather who only gets one simple task with a marriage proposal, which he himself had proposed, has been going viral for several days. The idea was good, but Grandpa John Hart fails.

Grandpa John Hart is on the road with his son Jaime Hart and his wife Jayce Flauding, when they meet a young couple together. The lovebirds are infatuated. Grandpa John has an idea. 'I said: wow, it would be great to ask your girlfriend here in marriage and to put a smile on her face. '

This happened, because Christopher, the man, had the same idea. The view of a vantage point in Albuquerque, where the passengers went by cable car, was beautiful. Everything was put into position. Grandpa John was a phone in his hands. He had to film.

Then it went badly wrong. While the marriage proposal can be heard in the background, viewers only see the grinning face of John, who accidentally turned on the selfie modes.

On the video (see below) you can see how John is looking more and more cheerful. 'Oh, this is so cool!', He says, as soon as Christopher goes out of sight on the knees.

As soon as someone notices that Grandpa John has made the mistake, everyone laughs out- except for John himself. 'It's okay, it's okay', we hear someone say. View the moment here: