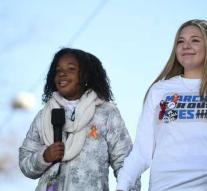 washinton - Hundreds of thousands of Americans took to the streets to protest against weapons and the surprise of the day was Yolanda Renee King, a granddaughter of the legendary Martin Luther King. She repeated the 'I have a dream.'

'My name is Yolanda Renee King', so granddaughter of her illustrious grandfather. 'My grandfather had a dream: that his four children would not be judged on their skin color, but on their character. I also have a dream, enough is really enough now and this must be a world without guns, ready! '

Hundreds of thousands, possibly millions of Americans, have taken to the streets in different cities during the 'March for our lives'. The protest follows a shooting in a high school in Florida, where an ex-student shot seventeen people.