Home / World / Governor does not take off to racist photo 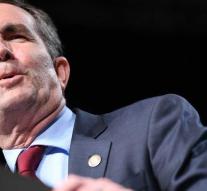 richmond - Ralph Northam, the Democratic governor of the American state of Virginia, does not intend to resign because of a racist photo on which he would have been portrayed.

On Saturday, he apologized for a photo from his 1984 yearbook when he was a student, but he later reported that he doubts whether he is in the picture. On the offending photo is a man dressed as blackface, next to another person in the notorious white suit of the racist Ku Klux Klan. The image does not show which of the two would be the governor.