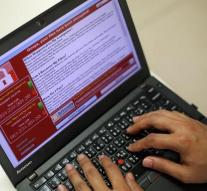 the hague - Until now, no Dutch organizations from vital sectors and government have been known to be affected by an infection with WannaCry ransomware. That has reported the National Cyber ​​Security Center (NCSC) in the Netherlands on Sunday.

Since Friday, tens of thousands of computers have been hit by the ransomware around the world. The malicious software encrypts files and unlocks them again for payment. The spread of the hostage software has stopped Friday night.

The center says Sunday that, despite rumors, at the NCSC so far no variant is known of the WannaCry ransomware that does not have a kill switch. The version that went on over the world on Friday was about such a 'kill switch', which acts as an 'emergency brake' that stops the infection.

The NCSC does take into account that a new ransomware variant can be found that does not use a kill switch.