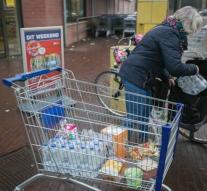 zevenaar - In Gelderland municipalities affected by a water outage, the government will Monday deliver water at nurseries, clinics, kindergartens and after-school care. For schools and GP surgeries is something settled: they can in the morning up to seven fire stations in the area to get water, so let the Safety and Health Region Gelderland Midden (VGGM) know Sunday night.

Sunday all nursing homes were supplied with water. In the municipalities Doesburg, Arnhem, Rheden and Rijnwaarden hit Saturday night in totally devoid around thirty thousand addresses of water.

A large water pipe that turned passes under the river IJssel leak. How this has come so is unknown. Also with a second conduit in the major area is something wrong. How long it will take to repair the cables is still unclear.

A stopgap now will come back in many places some water from the tap, but the emergency services and water company Vitens warn that such a solution 'is not stable. 'There is less pressure on the pipe than usual and residents are advised to boil their water as a precaution before using it.

As a permanent fix to the problems take longer to go to the authorities and water companies also arrange taps for the rest of the population. People can get there yourself with bottles, buckets or pans of water, told the health and safety area before.