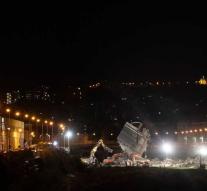 rome - The Italian government is enraged by the Italian clothing manufacturer Luciano Benetton in connection with the collapsed Morandi bridge in Genoa. This is the owner of the A10 at Genoa and the Morandi bridge after the motorways in Italy were privatized in 1999.

'We are starting the procedure for the withdrawal of the concession,' said Italian Prime Minister Giuseppe Conte. Some politicians think aloud about the need to nationalize the Italian motorways again.

Benetton is, through the Luxembourg holding company Sintonia, the most important shareholder of Atlantia, the company that manages approximately half of the motorways in Italy, including the A10 at Genoa and the Morandi bridge. Benetton receives money via tolls on the motorways. Via toll on motorways (also outside Italy), Atlantia has invested more than 4 billion euros last year. Benetton is blamed for not having used that money to provide maintenance on the highways, resulting in unsafe situations such as the collapsed bridge.

Benetton informed the Italian government that if the concession is withdrawn, it will be entitled to a substantial compensation that compensates for that loss. The contract runs until 2038. The Minister of Internal Affairs Matteo Salvini reacted furiously and thinks that Benetton can humbly apologize.