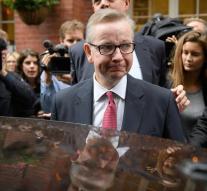 london - Brexit-supporter Michael Gove does not think Britain this year, Article 50 of the Treaty of Lisbon calls to formally launch the British withdrawal from the European Union. Gove said this Friday at a press conference in which he explained his plans in case he wins the battle for the leadership of the Conservative Party and the new prime minister.

,, One of the reasons why I say 'not in this calendar year, 'is that we have preliminary discussions- I do not say negotiations- have to carry, so I would not stretch to connect,' 'said Gove.,, It is up to us to decide if we Article 50 running and we'll do that when we are ready. ''

The election of a new Conservative Party Leader takes place this autumn. Goves rival Theresa May said Thursday that the disengagement process only formally be launched as Britain has a clear negotiation strategy.