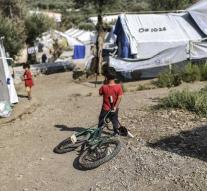 athens - The Greek authorities are threatening to close the large reception center for migrants in Lesvos. The governor of the North Aegean states that inspectors have found frightening conditions. If the problems are not resolved within thirty days, the camp must close.

In the notorious Moria camp some 8300 refugees and migrants have been accommodated according to official figures. They live in tents and containers. The United Nations and human rights organizations have already described the camp as overcrowded and unsuitable for human occupation.

Meanwhile, Governor Christiana Kalogirou is ringing the alarm clock. She stated in a statement that inspectors found, among other things, broken sewer pipes and enormous amounts of waste. There would also be a high risk of the transmission of diseases due to overpopulation.

'We are setting a deadline of thirty days to solve all problems', Kalogirou wrote to the director of the camp and the Minister of Migration.