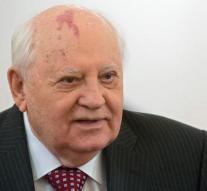 warsaw - The former Soviet leader Mikhail Gorbachev has fiercely lashed out at the West. According to him, NATO is preparing 'offensive operations' against Russia.

Gorbachev has criticized the deployment of 4,000 NATO troops in Eastern Europe. 'NATO has begun to let the Cold War into a hot escalate,' he said, according to the Russian news agency Interfax.

'All the rhetoric in Warsaw almost feels like a desire for Russia to declare war. They only talk about defense, but actually they prepare for offensive operations. '

It is clear that we must reduce the risk of military incidents, said the NATO chief earlier, referring to the,, risky and provocative '' maneuvers of Moscow.,, Russia is our biggest neighbor, and very important for European security. A meaningful dialogue is essential. ''

NATO Summit of Heads of State and Government is mostly dominated by the Russian threat. NATO will send four multinational battalions to Poland and the three Baltic states. Stoltenberg thanked the countries that will enter the command: Canada, USA, Germany and the United Kingdom. In addition, a Romanian brigade is transformed into a multinational force, which is deployed in the southeast of Europe.