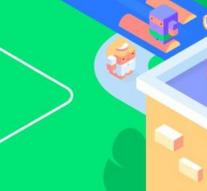 - Google is in Europe launched a competition for independent developers. Participants, by the end of the year to submit their game, chance to win prizes that help bring their titles to the attention of a large audience on Google Play.

Google has an extensive prize package available to participants. So the best 20 entries may show their game during the finale at the Saatchi Gallery in London on 16 February. In addition, they get a billboard in the British capital for a month to show their game, two tickets for the event and Playtime Pixel XL smartphone.

It will be selected 10 developers whose games become part of the Indie Corner collection in many European countries and will be promoted in other places in Google Play. Further everyone gets in addition to the above, Google's virtual reality glasses: Daydream View.

The top three will receive a YouTube campaign worth € 50. 000, a premium place in the European Google Play, two tickets for Google I / O and a pixel C tablet. The final winner will be featured in an Android Developer Story video on channels Android Developer. He or she receives a second YouTube campaign, Google Cloud Platform Credits worth $ 20. 000 and two tickets to the GDC San Francisco.

At December 31, the developers must register via the Indie Games Contest website.