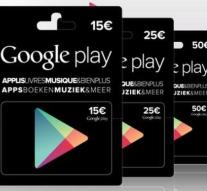 - Android users in the Netherlands are no longer exclusively dependent on a credit card to pay for apps and services in Google Play. The gift cards since the end of 2012 are available in many countries finally come to the Netherlands .

Google has announced the availability of the cards in our country has not yet officially announced, but the Netherlands is in the list of the countries where they are available.

The vouchers can be purchased in values ​​€ 15 , € 25 and € 50 . It is not yet known at which shops they are available . Competitor Apple has been making long used gift cards to purchase apps and other content in the App Store or iTunes Store.

The iTunes cards are also available at AH and Hema. Google Play for users who wish to use a credit card , could already use gift cards that were purchased abroad. Online is fully adhered to these cards.