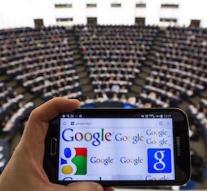 rome - Google has a long-term tax conflict in Italy for more than 300 million euros. According to the Italian authorities, the technology giant had been paid for too many taxes for many years by closing a large stream of income immediately into fiscally beneficial Ireland.

Many major multinationals have been under fire in recent years for their tax practices and the ways they use to avoid high taxes. Thus, in 2015, the Italian authorities reached an agreement with Apple, who also had to transfer 300 million euros to Rome. In many countries, this kind of business is playing.

The European Commission also claimed last year that Ireland recouped billions of euros to previously granted tax benefits from Apple. The Irish still oppose that because Brussels would not have the right to interfere with Irish taxation policy. For the Netherlands, a similar case is playing with Starbucks. There is still another matter with the European Court.