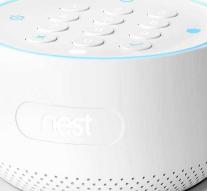 amsterdam - Google has gone through the dust for not reporting a hidden microphone in the Nest alarm system. That microphone had 'never been a secret', and its concealment was 'a mistake',...

The hidden microphone is in the Nest Guard device, a system that has not yet been put on the market in the Netherlands. Google emphasizes that the microphone is basically off unless users adjust the settings of their Nest.

It is not the first time that Google is embarrassed by privacy issues. The company was discredited in 2010 when it turned out that Google Street View cars were accidentally picking up data from unsecured Wi-Fi networks.