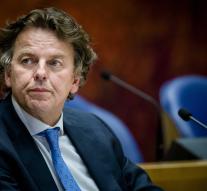 amsterdam - At the summit meeting on migration between Europe and Africa continents coming week should make concrete commitments to tackle the problem with the influx of refugees. The EU aims include better border security and cooperation on the return of asylum seekers to their own country. Africa expects more financial support and more opportunities for legal migration.

Development minister Bert Koenders (Foreign Affairs) said Saturday on Africa Day at the Royal Tropical Institute in Amsterdam. Koenders compared the proposed agreement with African countries with the commitments made ​​by the EU with Turkey on stemming the flow of refugees

" The migration agenda requires serious cooperation with Africa ", said the minister in Amsterdam. " Border control, terrorism, smuggling networks: there is room for negotiation. Based on self-interest, which leads to concrete results. " Koenders is Wednesday and Thursday with Prime Minister Mark Rutte on migratietop in Malta.

Last week it was announced that the Cabinet 15 million paves the EU fund for Africa to be established during the summit. The EU stops 1.8 billion in the fund should be supplemented by voluntary contributions from Member States. The fund is intended to assist African countries in addressing the root causes of migration.