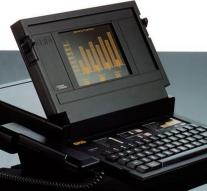 - The Briton John Ellenby, who spent the first laptop computer with flip-up screen on the market with his company Grid Systems in 1982, deceased on 17 August. Ellenby was 75, his son Thomas told the New York Times.

The Grid Compass had an orange-black screen and took the early eighties power: 8150 dollars. By today's standards would be more than 20. 000 dollars. For large corporations and US government agencies had the laptop nevertheless popular.

Later, he started the company Agilis, which makes handheld computers and GeoVector, which dealt with augmented reality.