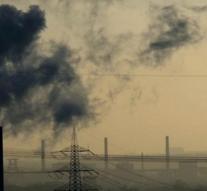 oslo - The global CO2 emissions in 2015 for the third year in a row more or less remained the same, despite the economic growth. According to a yearly analysis of the Global Carbon Project, which will be presented Monday.

The researchers as the cause of the decline in coal production in the US and the subdued economic growth in China. China therefore emissions fell by 0.7 percent in 2015 and will decline by 0.5 percent in 2016. In the US, the decline was 2.5 percent last year and will be released according to the report in 2016 by 1.7 percent.