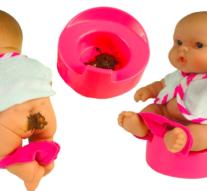 - Baby dolls that cry, need to be fed and changed; they are ever developed as a deterrent to dissuade teenage girls to become pregnant. But they have the opposite effect, because there are just more girls pregnant.

It reports the medical journal The Lancet Thursday, in which the results were published of years of research by the University of Western Australia in Adelaide.

This VIP program (Virtual Infant Parenting) two groups totaling 3,000 school-aged girls were compared. One group had to take care of a baby doll and the control group did not.