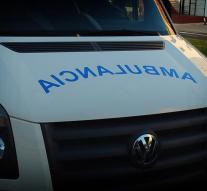 They played a cushion at a restaurant in the Spanish Caldes de Malavella.

The police are doing research, according to the Spanish newspaper El Pais.