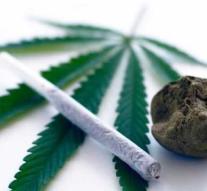 - A 9-year-old girl who thought that her fellow pupils at her elementary school in the American state of New Mexico were happy with some sweets turned out to have distributed medical marijuana. Teachers suddenly noticed that the students started to behave strangely.

The incident took place last Thursday. 'I knew immediately that something was wrong. I felt dizzy and thought the room was turning, 'said the 9-year-old girl to the local station KRQE who had also nicked the 'sweets'. Three other students also ate the marijuana.

The student from Albuquerque had taken the medical marijuana from home. The 'sweets' were from her parents and were labeled 'edible goods' in a jar.

The school switched on the emergency services. The children have been examined but there are no permanent complaints.

The girl said she knew that drugs were dangerous. She is not happy that she has taken drugs by accident. 'All those lessons that I have followed about drugs have been for nothing,' says the student.

Children are now no longer allowed to hand out food to primary school. Parents have also been warned to deal better with medicines and drugs.