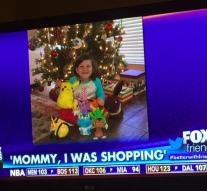 maumelle - A very clever girl of six from the US city Maumelle Arkansas used the fingerprint of her sleeping mother's to buy toys for hundreds of euros.

The girl thumb of her mother used more often to unlock the phone from her mother YoutTube movies or Netflix. But this time the girl herself decided on a round shop at Amazon. com treat. Result, thirteen Pokémon gifts with a total value of $ 250.

'We thought someone had hacked into our account,' mother Bethany Howell tells opposite Daily Mail. But when the package delivery actually at her standing on the sidewalk, she became aware that there was something else going on.

In retrospect, it became clear that the unintended purchases must be made after Bethany with her daughter had watched a movie. 'I think I fell asleep. My daughter Ashlynd took my phone and used my finger to buy gifts for themselves. '

'Yes, Mom, I was shopping,' the girl inquiring frankly admitted. Ashlynd gets no punishment for her sneaky shop session. 'She did not know what she did. They can keep the toys because they promised that they will never do it again. '