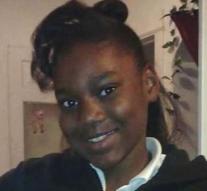 milwaukee - An American girl who won a prize with an essay on the ongoing firearm violence in her hometown, was shot dead herself. The 13-year-old Sandra Parks died after she was hit by a stray bullet, reports American media.

The student had described two years ago how she was burdened by the violence in Milwaukee in the state of Wisconsin. 'In the city where I live, I see and hear examples of chaos every day,' the teenager said. 'Smaller children are the victim of senseless firearm violence. 'She won a prize in a writing contest with the article.