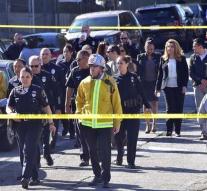 los angeles - In a shooting at a high school in Los Angeles, four students and one adult woman were injured. The police arrested a twelve-year scholar as a suspect.

The shooting was at the Sal Castro Middle School, a school with classes of up to about fourteen years old. The agents have found a firearm and confiscated.

A boy was hit by a bullet in his head, but according to the doctors in a hospital in Los Angeles he is out of danger.