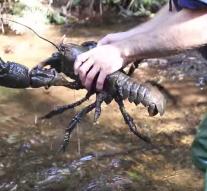 The Astacopsis gouldi can grow up to eighty centimeters, six kilos sixty six years old. The lobster lives only in areas of Tasmania and is threatened with extinction. It is estimated that there are still a little 100. 000. Through woodcaps in the vicinity, too much sand and clay rinse in the creeks and rivers where the lobsters live. As a result, the extremely slowly growing larvae survive for seven years must not grow up. In recent years, the population has already returned by twenty percent. The government also wants to place cameras to catch poachers.

Nature warden Tod Walsh says in the Guardian that the endangered animals have a huge power in their shears. Bottles break easily. Attacks on people have never been reported.