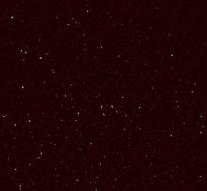 - The first photo of a new South African super telescope has detected hundreds of galaxies in a distant corner of the universe. In that area there were known only seventy; the MeerKAT telescope took no less than 1300.

The device, which is 600 kilometers north of Cape Town is being built, is also nowhere near full strength with only sixteen of the 64 dishes of the telescope are still operational. The rest is only put into operation in a year. The leader of the project is in his element. 'The MeerKAT is already the best telescope in the southern hemisphere. '

It is intended that the MeerKAT in the 20s will be part of the Square Kilometre Array, a global telescope network with three thousand plates. The project is one of the greatest scientific enterprises ever.