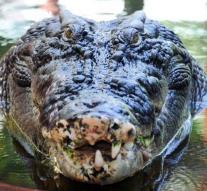 canberra - The Australian police have launched an investigation into the death of a 5 meter long crocodile. The huge animal died of a shot wound according to Australian media. The shooter is in danger of years of imprisonment and a severe fine.

Authorities picked up the crocodile this week after a tip from a river in Queensland. The animal was probably dead for a few days when someone saw the carcass drift and hit an alarm. According to an expert, the huge crocodile was possibly fifty to seventy years old.

Police officers have already investigated the carcass, but also carry out an autopsy. Activists also want to know who is behind the crocodile's death. PETA Petitions Organization promises a reward of up to $ 5,000 (over 3300 euros) for information about the perpetrator.