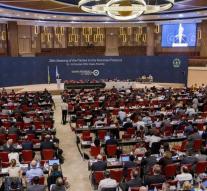 - Almost two hundred countries signed in Kigali for a reduction in greenhouse gas emissions. This concerns in particular gases used in refrigerators and air conditioners. The decision should ensure the long term that limits the global warming.

The decision in Kigali is a consequence of climate decision last year in Paris was taken under the auspices of the United Nations.

The most important aspect is that developed industrial countries like the United States and European countries have also signed the decision. limit these signatories to start greenhouse gas emissions by 2019 by 10 percent.

Developing countries produce far less pollution, follow a different path. They should have frozen the emission of gas at the latest in 2028. From then begin these countries to reduce greenhouse gas emissions.