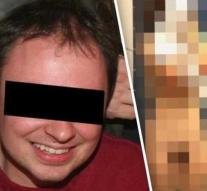 ghent - Mike D.B., the 41-year-old IT specialist from Ghent who was arrested for filming women in the shower, has been released under certain conditions.

He may not have contact with his victims and may not surf the Internet, according to Het Nieuwsblad.

De Gentenaar says he regrets and 'disgusts himself', says his lawyer Sofie Vermeir.