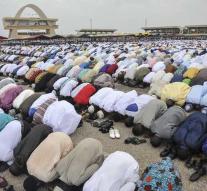 accra - Ghana has kindly requested mosques to use WhatsApp for prayer calls instead of loudspeakers. Day in day out, Africans face a lot of noise from the calls and something has to change.

In the capital Accra, the authorities have asked Muslim communities to use WhatsApp. However, these do not seem to make much sense here.

'Why can not the call to prayer be sent via SMS or WhatsApp. The imam can then send messages to everyone, environment minister minister Kwabena Frimpong-Boateng wonders.

'I think this will reduce noise pollution', he says to the German DW. 'It may be controversial but it is something we can think about. '

Many Muslims living in the capital have doubts about the proposal. Imam Sheik Usan Ahmed who calls people to prayer five times a day, does not mind. He doubts the economic side of the story. 'Something like that costs money. We try to do what is possible but I think it is not necessary. '

Churches in Ghana are also seen as sources of noise pollution. Other Muslims who have spoken to DW do not seem to be particularly interested in digital calls either. 'I think we are not doing anything wrong. Christian churches also do it themselves before sunrise ', says Nora Nshiah.

Kevin Pratt, too, does not see the minister's idea. 'Not everyone is on social media and is as literate as he is. '

The Ghanaian government has hinted that they want to introduce laws in order to limit the noise nuisance.