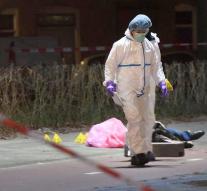 breda - A BMW which was found burned Saturday in Essen (Belgium) is almost certainly used as a getaway car after the attack Friday Bredanaar Peter van der Linde.

Police have identified the following research. The BMW was stolen in Breda late December. It is suspected that a stolen Audi was used by the shooter but that is not exactly clear yet. The Audi was found burnt in Bavel.

Peter van der Linde (60) was shot dead Friday night after leaving a cafe in Breda. There are suspicions that the caravan dweller has played a role in the ecstasy trade. He was known to the police.

In tracing is requested Tuesday paid attention to the case. The police are looking for witnesses who have seen the shooter prior to the shooting. Moreover, the police asking for more information about the victim and a possible motive, announced a spokesperson.