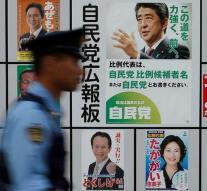 - The Japanese ruling party LDP wants to change the current pacifist constitution of the country. That's Tomomi Inada, the policy chief of the LDP, said Sunday, after it became clear that the party is the big winner of the Senate elections this weekend.

The party of Prime Minister Shinzo Abe not only won the election, exit polls suggest that the LDP and like-minded parties have achieved a two-thirds majority. This enables Abe and his able to modify the constitution.,, Our party has already submitted a draft to reform the constitution, '' says Inada.

The Constitution of Japan dates back to 1947. In the document, which was written when Japan was occupied by the United States, the sovereign right of the state to wage war explicitly renounced. Abe has long argued for a revision. The prime minister will find the Constitution too restrictive and not outdated. If the document contains a ban on armed forces, although Japan nowadays an army.