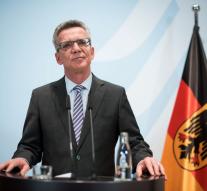 - Too many Afghans come to Germany as an asylum seeker. That must be a lot less. That said German Interior Minister Thomas de Maizière on Wednesday. " Afghanistan is here in second place with countries of origin. This is unacceptable," De Maizière.

The policy will henceforth be aimed as much as possible to let Afghans return to their country, said the minister.

According to him, with Afghanistan also agreed that the country keeps people aboard, mostly young and middle-class people. They need to rebuild the country. Afghanistan is thanks to the efforts of German politicians, the military and development aid has become a lot safer, though security is not yet optimal, says de Maizière.