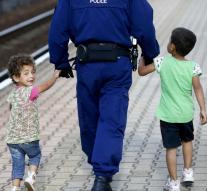 - The German government comes up with a tightening of asylum to migrants who are not entitled to asylum faster to get out of the country . This was reported by the German newspaper Bild Wednesday citing people in the government .

According to the newspaper does the government of Chancellor Angela Merkel to daycare at the border, an accelerated asylum procedure and expedited deportation of people who have no right to asylum.

Albania, Kosovo and Montenegro will be considered as safe countries. Who flight from there to Germany, will anyway be returned. The new policy should according to Bild the weeks leading to an increase in the number of refugees being deported.

According to the newspaper in late September, there were 193.500 refugees in Germany who have asylum, of them there are 11.522 evicted no right according to the authorities.

About 21000 people have of themselves leave the country. For the evictions would also military aircraft are deployed in the future. Persons expelled were there beforehand not be aware of, in order to prevent them from hiding.