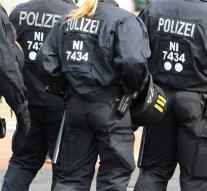 berlin - The police arrested three Iraqi refugees who wanted to commit an attack in Germany. They had already collected gunpowder from flares and would have ordered an ignition in Groot...

The three were arrested in the Dithmarschen region in the state of Schleswig-Holstein, according to German media Wednesday.

The purpose of the attack is not known but the three wanted to hit many 'infidels but no children', according to one of them. According to the researchers, the three acted with Islamist motives. The Iraqis had come to Germany in 2015 and have since developed their tax plans.