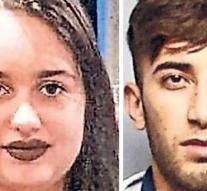 mainz - For the third time in a short time an asylum seeker is suspected of murdering a German girl. Yesterday it became known that the body of 14-year-old Susanna F. was finally found. The suspected perpetrator, the criminal offender Ali Bashar, has taken his legs back to Iraq with his family.

In the middle of the Mainz forest, near the railway, trackers of the police discovered the corpse of the Susanna missing since May 22nd. According to forensic specialists, German media say, traces of sexual abuse have also been found at the crime scene.

The 20-year-old suspected perpetrator knew the girl through his brother. It will be difficult to get the fugitive Bashar before a German judge, because Iraq has no extradition treaty with the Federal Republic.

A witness had reported to the police according to the Allgemeine Zeitung. He knew that the suspect had known that he had killed the girl two weeks ago. Bashar has now fled to Erbil in Iraq with his eight-member family, including his father and mother. They would have used forged passports.

The young man has collected a considerable criminal record since his arrival in Germany via the Balkan route in 2015: insult, abuse, robbery. He is also suspected of rape of an 11-year-old girl.

The notorious case takes place at the height of the German asylum affair, which is becoming increasingly dangerous for chancellor Merkel and her ministers. Many hundreds of residence permits, especially in Bremen and Berlin, may have been provided under false pretenses and by deception of officials, asylum lawyers and translators.

Also suspect Ali Bashar had long had to pack his bags. His asylum application was rejected in 2016, he appealed and complained that he would be prosecuted by the Kurdish PKK. That was also rejected by the judge. Nevertheless, he did not have to leave.

In any case, this is the corn on the mill of the nationalist Alternative für Deutschland, the opposition party that Chancellor Merkel is attacking because of her generous refugee policy. The AfD also demonstrated for the murdered Mia (15) from Kandel and Maria (17) from Freiburg.