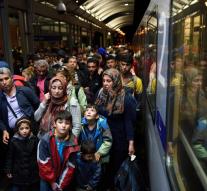 - Germany sends Syrian asylum seekers back to countries where the EU within traveled, as it should be according to the agreement of Dublin. Since August was because of the large influx of Syrians temporary exception to that rule, but it appears late last month to be withdrawn.

Berlin sends Syrians and all other displaced people return to all EU countries except Greece, as did the German Interior Ministry announced on Tuesday. Or are there many returned doubtful. There are very few fact that upon entry into the EU have to register in another country. Moreover, the vast majority of refugees in the first instance within the EU via Greece.