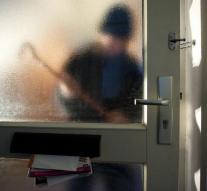 aachen - Police forces in three German states want to cooperate more with the Dutch and Belgian police against the growing number of burglaries by gangs that use the open borders to disappear. Monday come according to German media together the ministers in Aachen there to sign a declaration.

The agreement must next month already resulted in joint inspections.