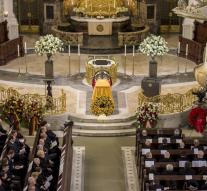 The social democrat and publicist Schmidt died on November 10 at the age of 96. Schmidt was chancellor from 1974 to 1982, succeeding Willy Brandt. In his tenure, he was among more confronted with the oil crisis in the seventies and the fight against terrorism of the Red Army Faction.