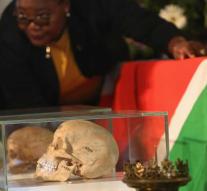 berlin - Germany has given Namibia the physical remains of 27 people who were killed in the colonial period. Robbed parts of the body were then taken from the African country to be used in so-called 'race studies'.

Germany operated from 1884 to 1915 in 'German-South-West Africa', nowadays Namibia. During this colonial rule, tens of thousands of members of the Herero and Namavolks were murdered. It is also called the first genocide of the twentieth century. German institutions have been giving body parts several times since 2011.

A Namibian delegation traveled to Germany to receive robbed remains, including nineteen skulls. 'These skulls tell the story of the brutal, godless colonial past and the oppression of the Namibian people,' said the Namibian cleric Ernst Gamxamub during a church service in Berlin. 'They say: never again. '