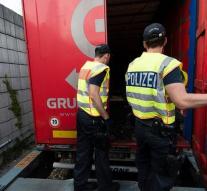 Berlin carried out border controls, which are an exception to the free movement in the Schengen countries, in September 2015 due to the large flow of refugees. The measure has since been extended. It concerns controls at the border with Austria and air links with Greece.

The new extension is required by De Maizière because of the terrorist threat and illegal migration.