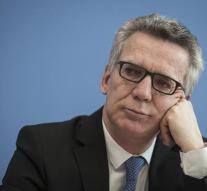 berlin - The German authorities will extradite a Tunisian who was possibly involved in a bloody attack on tourists in his homeland. The German Minister Thomas de Maizière (Interior) showed Sunday knowing that the man could be sent back.

'I can confirm that the dialogue between us and the Tunisians has been successful,' the minister told the German broadcaster ARD. 'The terrorist is in custody and I expect he will be deported soon. 'The suspect, Haikel S., was arrested last month. He would have recruited members in Germany for terror group Islamic State.

S. lived in Germany for ten years, until he left in 2013. He resurfaced about two years later and asked for asylum. That was five months after the attack on the Bardo Museum in Tunis in March 2015. During the attack by terrorists arrived 21 tourists were killed. The Tunisian authorities suspect that S. was involved in the massacre.