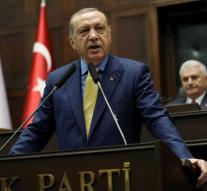 berlin - Germany, together with, among others, has planned a plan to hold a NATO Summit in Istanbul. This reported the newspaper Die Welt Wednesday. Turkish President Erdogan invited the Western Alliance to the summit in Warsaw last year to come to Turkey.

The German newspaper reported that Germany had a sting for it because Berlin did not approve of the Turkish government. Germany fears that the impression would be that the Alliance supports Erdogan's internal politics.

Die Welt writes on the authority of high figures at NATO that Germany is supported by France, the Netherlands and Denmark. If it appears that NATO has dropped Erdogan's invitation on Germany's insistence, it could damage even more disturbed relations between Berlin and Ankara. The relationship between The Hague and Ankara is also under pressure.

NATO must take a decision on the issue at the end of June. According to Die Welt, the NATO Summit 2018 will probably be in Brussels.